Almost all parameters in the Kilohearts Ecosystem can be modulated. Modulators can be added as modules in the horizontal lane along the bottom of the screen. The macro buttons at the top of the screen also use the modulation system and are hooked up to their targets in the same way as other modulators like envelopes and LFOs.

To better understand the modulation system it is useful to understand some of the internal timing of Phase Plant. Values in the generator section are updated for every sample. This is called "at audio rate". While modulators output values much less often. Typically every 64 samples, but it can be more often depending on your DAW settings and other circumstances. We call this "at control rate". Therefor there is a limit on how fast the output of your modulators can change. Anything around 100 Hz or higher is likely so affected by aliasing that it it impossible to make any controlled changes to it. It's mostly just static. If you want very fast modulations, consider using the audio rate modulation system available in the generator stack only. 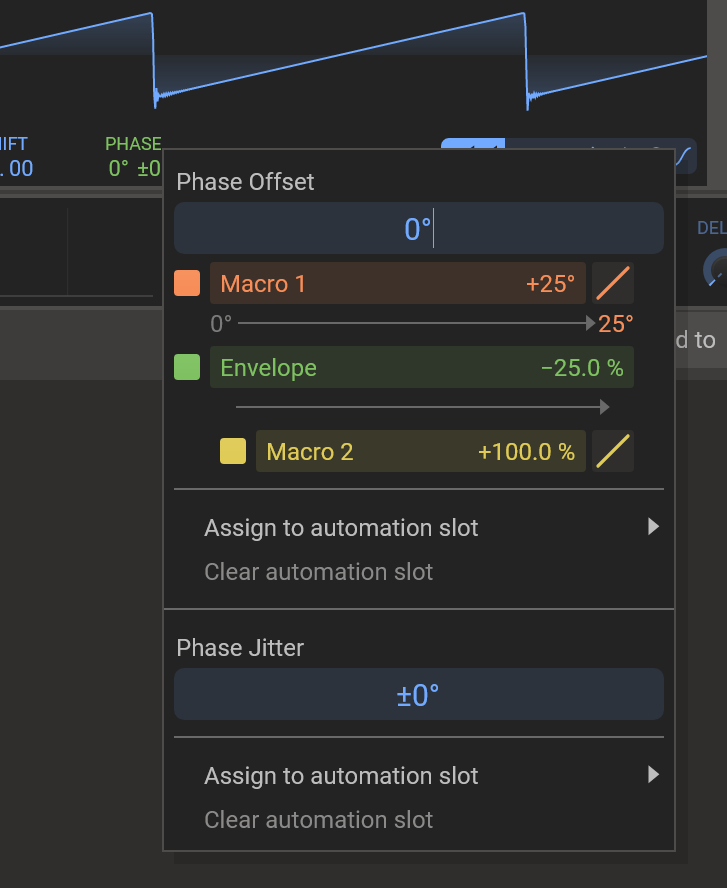 Along the bottom of the screen is the modulator lane. Here you can add modules that can be used for modulation such as LFOs and envelopes. It's possible to add up to 32 modulator modules. To add a modulator, click on the icon that appears in the lane as you hover it (the dotted area).

All modulator modules have a small animated display at the right hand side that shows the current value that the modulator outputs. The value for the most recent voice is shown in blue, and the other voices are drawn in grey. Some modulators also have a global value which is used when modulating parameters which are not tied to a voice. This is also displayed in grey.

The output depth of all modulators can be scaled by clicking and dragging on the animated output display. The depth can also be modulated by routing another modulation to this parameter.

The envelope modulator is a modulator module that provides an envelope that you can use as a modulation source.

It uses a standard Kilohearts envelope, and the modulation triggering functionality is described in detail in the triggering chapter.

The Envelope Modulator has one additional setting in the menu, Seamless. When enabled, the envelope will restart from the current value when triggered, instead of resetting the envelope to zero (i.e. the attack will start in the middle of the release).

The LFO (Low Frequency Oscillator) module is one of the modulator modules you can add in the modulator lane at the bottom of the screen. They are ideal for modulating parameters in an oscillating and rhythmic fashion. The LFOs are very versatile since you can design your own LFO shapes. The LFO editor is described in detail in the curve editor chapter.

Trigger
This is meant as a modulation target for remotely triggering the LFO to restart. Right-clicking on the trigger button will bring up the triggering menu. The modulation triggering functionality is described in detail in the triggering chapter.
Frequency
Controls the speed of the oscillator, either in Hertz when in free running mode, or as a note length when running in synced mode.
Phase
Adjusts the phase offset of the LFO.
Shape
The LFO has a vast array of predefined shapes. Clicking on the name of the default shape will take you to a list of available shapes, organized in folders. You can also edit the LFO curve yourself in the LFO editor.

This modulator takes modulation design to the next level. By using a wavetable as a modulation source, it allows you to cycle through 256 LFO shapes in one modulator. This unique modulator opens up all kinds of possibilities. Use it to store a bank of rhythmical variations, or a variety of melodic sequences, or any other wild idea you can come up with. When combined with a Random modulator, LFO Tables are wonderful for crafting evolving generative patterns.

The curve modulator is quite simlilar to the envelope modulator above.

The curve graph has two handles that allow you to set loop points within the curve, while the loop symbol lets you select the desired loop mode.

Trigger
This is meant as a modulation target for remotely triggering the LFO to restart. Right-clicking on the trigger button will bring up the triggering menu. The modulation triggering functionality is described in detail in the triggering chapter.
Modulator Rate
Sets the rate of the modulator. The total time to complete one cycle is displayed in seconds. You can set the speed to be freewheeling or synced to the DAW clock.
Lock
Locks the loop settings to the current values when loading curves.
Curve Editor
The pen symbol opens the curve editor. Read more about the editor in the Curve Editor chapter.

This module outputs a stream of random values that can be used to create random movement in your patch. For polyphonic patches, the random modulator will output different random values for each voice.

The Random module has an additional setting in this menu called voice mode, which adjusts how the random sequence is seeded with the following values:

Frequency
Controls how often new random values are picked, either in Hertz when in free running mode, or as a note length when running in synced mode.
Jitter
Randomly adjusts the timing for when values are picked, making the modulator less rhythmic.
Smooth
Blends between the random numbers to create a smooth sequence instead of a stepped one.
Chaos
Adjust the length of each random step. For lower chaos values, the next random value will be closer to the previous one. At 0 the random value will update only on triggers, and then stay the same until the next trigger event.

Tracks the amplitude of an incoming audio signal and generates a modulation signal based on that. Input can be selected in the lower left corner: Lane 1–3, Master, or Sideband.

Tracks the pitch of an incoming audio signal and generates a modulation signal based on that. Input can be selected in the lower left corner: Lane 1–3 or Master or Sideband.

Keyboard graph
The vertical sliders in the graph allow you to set a range and a center frequency.
Sensivity
Low sensitivity gives more stable results and higher values allows for faster changes to the output.

This modulator lets you use the played note as a modulation source. The range of this modulator is tuned to be the same as many of the cutoff and frequency knobs you will come across in Phase Plant and in the Snapins. This means that if you modulate these parameters at 100%, they will perfectly track the note you play.

Polyphonic pitch bend will effect the modulation signal of the Note modulator.

This modulator reflects pressure data from a MIDI controller, I.E. with how much force you are holding your keys down. It can receive it's data from various sources; the "channel pressure" MIDI CC, as well as "polyphonic aftertouch" MIDI messages. If you are using VST3 it additionally exposes a "Polyphonic Expression" slot to your DAW.

Pressure is an MPE compatible modulator, and if your DAW supports polyphonic expressions this module can have a different pressure for each played note.

This modulator tracks the velocity of each played note (how hard the note was initially struck). Use this to make your patches velocity sensitive so they can be played both softly and loudly. It can also be used to track release velocity, which is available on some MIDI controllers.

This modulator tracks the pitch wheel of your keyboard or controller if available.

The note-on and note-off messages from your MIDI controller will generate signals for this modulator.

Any MIDI continuous controller can be used as a modulator. After instantiating this module, you will be asked to move a controller. Once detected, this controller will be bound to the module. To assign another controller, just click the bottom text field.

MPE controllers commonly have a third axis of polyphonic control on each key. Typically activated by moving your finger up and down on the key. The MPE Timbre module lets you use this polyphonic data for modulations.

Map incoming values to whatever output values you need with custom remap shapes. Remap brings you even more precise control over your modulation. If you connect this module between an LFO and a generator, Remap can tweak the LFO curve in all possible ways. As usual, there are numerous scales and curves to choose from, and the editor allows you to edit them freely. Detailed info about the curve editor can be found in the curve editor chapter.

The Lower- and Upper Limit modules can be used to clamp the output of another modulator so that it never goes outside certain values. The white bar in the middle can be moved vertically and the graph will illustrate how the value stays within the limits.

Remember that you can modulate the limits when relevant. 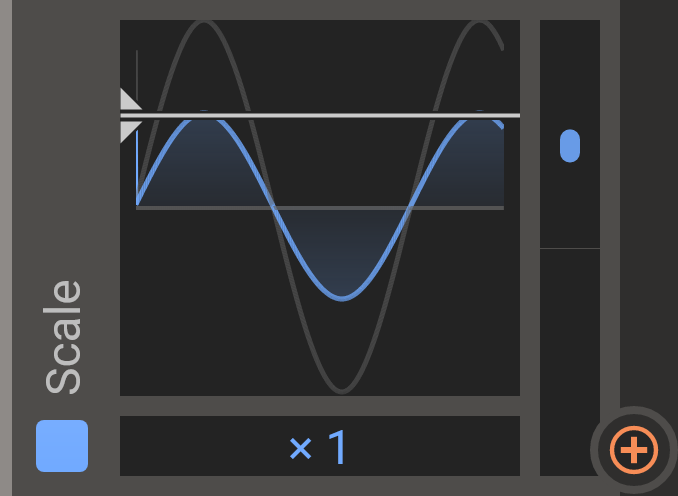 Adjust the output of another modulator with the Scale modulator by moving the white handle vertically. You can use the bottom multiplier control to change the order of magnitude.

Remember that you can modulate the scale factor when relevant.

Every time the trigger signal rises past the threshold (which can be changed by right-clicking on the trigger arrow) a new value will be sampled from the input signal at that moment. That value will be held and output from the module until a new trigger occurs.

The modulation triggering functionality is described in detail in the triggering chapter.

Many of the modulation modules have a trigger button. The trigger button (>) can be use to trigger a modulator and restart its cycle. The trigger input is actually a gate, i.e. it it will turn on when you press it and turn off when you release it. It will restart the modulator from zero when turned on, and perform its sustain action until the gate is released (for envelopes or LFOs/Curves with sustain loop mode, for example).

By default, the trigger gate is controlled by the note, turning it on when a note is struck and turning it off when the note is released. This behavior be changed (see below)

When modulation is attached to the trigger, it will stop being triggered by notes and instead only by the modulation (and clicks). This behavior be changed (see below).

Right-clicking on a modulation trigger button will bring up the trigger menu, where you can adjust the trigger sensitivity for when the trigger is modulated. You can also change the behavior for when notes trigger the modulator:

Auto
The default setting, notes do not trigger the modulator when a modulation is attached to the trigger. Otherwise, this mode selects between "Always" and "Legato" depending on the polyphony setting in the Phase Plant voice settings.
Never
Notes never trigger the modulator. You can use this setting to create a free running LFO.
Always
The modulator is triggered by every note-on.
Legato
The modulator is triggered by the first note in a group of legato notes, but will not be triggered again until all notes are released.